RNA in gene control across kingdoms

The discovery of catalytic RNA in the early 1980s entirely changed our views about the biological functions of RNA molecules. This breakthrough led to a remarkable increase in knowledge about the folding of RNA molecules and their biological functions. Besides, innovative technologies revealed that the non-coding part of genomes gives rise to numerous new small and long non-coding RNA in all kingdoms of life. These discoveries transformed our thinking about how gene expression is regulated.

This international meeting will be a unique opportunity to welcome remarkable scientists and to highlight RNA research in Strasbourg within a stimulating and international environment. It will cover two related topics: RNA regulation and the genetic code in translation. This meeting is also organized for the achievements of Prof. Eric Westhof who has initiated and coordinated the NetRNA labEx (Networks of regulatory RNA across kingdoms in response to biotic and abiotic stresses).

The role of non-coding RNA in regulating gene expression and genome stability has become a topic of soaring interest. Meanwhile, all central processes of gene expression, from mRNA biogenesis to translation and degradation, revolve around messenger ribonucleoprotein complexes (mRNPs). Large-scale characterization of regulatory RNA-binding protein targets revealed that these proteins co-regulate mRNA that are often functionally related. RNA fulfill their functions by adopting dedicated three-dimensional structures enabling them to interact in a coordinated manner with their partners (regulatory proteins or RNA) or by directly sense the environmental cues (riboswitches induced either by environmental cues or small molecules). These structures control the biological functions because of the very specific underlying interaction mechanisms. Studying them open multiple avenues both at the basic and applied level. This meeting will discuss new features that have emerged over the last few years on the RNA-based regulatory networks in eukaryotes – animals and plants –, as well as in various human pathogens including viruses, bacteria, and parasites.

The genetic code unraveled some 55 years ago, is now viewed at the molecular level. As we now know it appeared in stages as a result of the complex molecular recognition and selection processes full of contingencies at the core of the transition from chemistry to biology in biological evolution. In the last twenty years a wealth of structures of active ribosomes and components of the translation apparatus has appeared. We now have a rich diversity of structures at sufficient resolution to integrate biochemical and biological observations in congruence with molecular data. In this meeting, these structural constraints will be described with their functional and organizational impacts on the cellular integration and homeostasis analyzed from various angles.

Thirty internationally known speakers from Europe, USA, and Australia have already accepted to present their last results. The topics of the meeting will include broad themes: RNA and evolution, RNA and immunity, RNA machineries in regulation, RNA and molecular recognition, ribosome structures and decoding… Young scientists will also have the opportunity to present and discuss their data.

The meeting NetRNA will be held at the Bischenberg in Bischoffsheim, France. It will start on May 2nd for registration/lunch 11:00-13:00 and end on May 5th after breakfast. 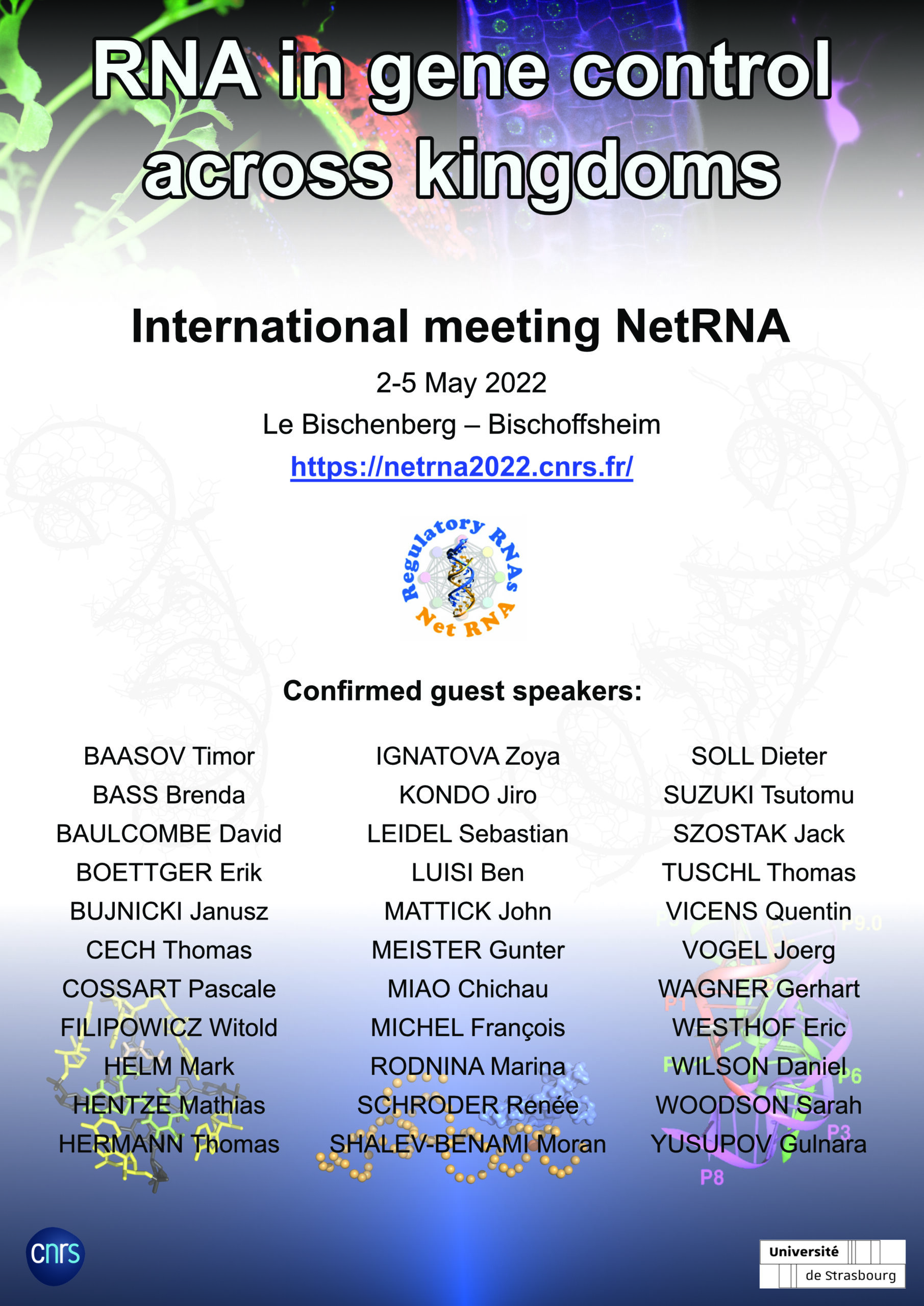